The party learned more information about the deaths today, getting their investigation moving along. However, we also are hitting the first of the some of the planned combat portions of the adventure and the goal is to meet the orcs and do so without killing any of them.

The Orcs made their way back to the home they had been using and being watched by the citizenry, loaded up their ponies and war wolves and rode away to the north. Many of the townsfolk were glad to see them go, angry curses following them, others had a pensive look.

Through it all, Sundar and Thog were finding the best three hoof prints they could find and were going to make plaster molds. Many farriers have a mark of design to their shoes and we are hoping to eventually use a mold to identify the farrier who shod the heavy warhorse. And then use that information to find the person and where he might be. 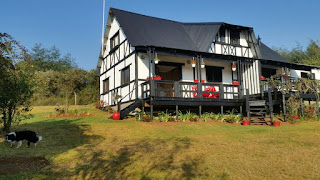 We went back to our house and made sure the window and door were sealed, deciding to at least follow through with our plan by heading off to the Woodward’s cottage at the northern end of the province and talking to the two wards he supposedly had living there. It was a bit after 4 when we arrived on Spiritmonth the 27th and eventually the dutch doors were opened by a 20ish year old thin human male. He identified himself as Nagaf and motioned the other person in the hut to come out – an attractive blond young woman named Fain.

Nagaf became the Woodward’s ward about 4 years ago when his parents had died suddenly from a fever and he was alone with no one to help support him. Having no marketable skills, the Woodward took him in and over the last 2 years, officially apprenticed the young man to follow in his footsteps.

Fain was a similar situation as being helped by the Woodward. Some 9 months she was been beaten and left for dead in the woods by her lover/boyfriend. Nursed back to health, she has been here ever since cooking and cleaning for the Woodward and Nagaf.

They were aware of the Woodward’s predilections both sexual and deviant and even though they sometimes participated, it was never expected of them nor encouraged – in fact most of the time it was pushed aside to maintain the harmony of the Woodward’s home and keep the drama to a minimum. They do know that we had two visitors that night and neither of them participated nor interacted with the visitors. It sounded like the Woodward knew at least one of them and it was sometime after midnight that the liaisons left. The thought was he had washed himself from the basin in the kitchen and then went to sleep. He was been poisoned – lesions and sores and burns were about his genitals and anus area.

At first we thought he might have been introduced the poison directly but now we assumed it was added to the water or the washcloth – and when he “cleaned” himself up, got the poison that way. Brading did a detection and found a faint trace coming the basin – which led us to believe our theory.

It was after 5 and we had nothing new we wanted to ask, so bidding the two of them farewell after taking a short tour of the northern border of the Province, we headed back to the main part of the village and Tavern to get some dinner and a drink.

We talked to Fantil, the half-orcish proprietor and he gave us his thoughts on the situation being a half-orc and having some feels for the issue from both sides of the banner. He speaks for other similar like-minded people in Durcent province – there is sometimes a naked racism that most populace doesn’t even know they participate in. And although things with the orcish tribes have been peaceful – too many people are just willing to laugh at them and relegate them to “greenskins” and nothing more.

It seems that the orcs on their way out of the Province had been talking long and loud about the death of one of theirs and had been pressuring the Chief Glamar for a retaliation for this death and insult. The chief had been quiet about it but enough townsfolk did overhear the Chief give the approval for a raid and that it would happen tonight at midnight.

There was talk of mustering a defense for this and calling up the militia. Durcent Province has about 500 people living there, Maciles a bit let and the Ostlerson Demesne perhaps 300 total. Mustering a proper militia was going to be difficult and most likely not going to be more than a small deterrent. This raid was not going to be from farmers, but young orcish raiders and the estimation was 50 of them.

We needed a response team and we needed it to be in place to head off the raiders and at best bloody their nose. So for a short mustering Sir Durcent wanted us to be involved and we were going to number: Our 5 party members, Thog, Sunder, Thurbarn, Fersic, The Constable, 5 militia men (2 of them with flat bows), and 5 of the lord’s own guardsmen (again, 2 of them with flatbows).

We knew the area closest to the orcish encampment on the northern border of the Province had three large natural clearings and orcish raiders typically ride in a wide line to terrify their targets. So the thought was to go to those three clearings, clear out the crofters that might live there and send them back south to the Manorhouse, and then lay in wait for the orcs to arrive and meet them head on.

No matter what, we wanted there to be NO loss of life on either side and the plan was drive off and deter – not slaughter.

The clearing of the peasantry went without much issue and by 10 pm the homes had been cleared. We guessed the middle clearing was the best choice for use and we decided to split our forces. Fersic, 1 guardsman, and three militia men would head to the eastern clearing and hide in a home there. The Constable, 1 militia man, and 3 guardsmen would head to the western clearing and hide in a home there, and the party, Thog, Sundar, Thurbarn, and the last militia and guardsman would stay here and we would do the same. Everyone was given a signal whistle and blasting it meant the orcs were there and the groups should race to help out. Estimated jog at night through the trees was perhaps 2-3 minutes in between each clearing and another minute or so to clear each clearing as it was.

We were set up in place and time passed. Eventually we were sure it was midnight and then some. No whistles, looking out the windows showed nothing. The Sheriff went up to the loft and using his sword, slit the thatch up there and looked out. In the distance to the east was a slow line of torches, 20 or 30 in number and they moved with slow care to the clearing and were gone from view.

As we were deciding to run east and help out, we then heard the whistle blast coming from the WEST clearing, calling for help! And then the east clearing was blowing as well. Shit. We made a fast call to split our forces, taking our party and Thurbarn to the west, and leaving Thog, Sundar, and the two other men to run east and help out.

We ran through the trees until we arrived at the clearing. At least a dozen orcs were here, three with flatbows that we could see, and they were beating the militia and guardsmen terribly – the Constable standing toe to toe with three of them keeping them off his man.

Magic Missiles and other spells were fired back and forth as we made a showing, the difficult terrain of the fields making our run a bit slower than we’d like. But the Orcs did a bit more looting before one of them had said that they had done what the needed to do and should run. A sleep spell fired off, dropping 4 of the orcs and making those remaining more interested in running away with their ill-gotten gains.

The Constable was holding a trio of orcs off his fallen man but eventually dropped from his wounds and the orcs took out their aggression again him until he was unmoving. We struggled to finally get in melee range as the orcs were pulling away but between our arrival and the standing of the last two militia men, we managed drop three of the orcs.

We fired off a Stabilize spell which brought everyone back from the brink except for the Constable who had taken terrible wounds from the fight and succumbed to his injuries. As we were tying up the 7 Captured orcs we ran back to the east where the blasting of whistles continued to call for help, Sheriff Thurbarn arranging to bind up the orcs and get the weakened and fallen men back in shape.
Posted by Vanadorn at 7/12/2019 11:29:00 AM

For this next campaign, I've moved the focus further north on my map. We are inland, sort of a combination barbaric area with dwarven ki... 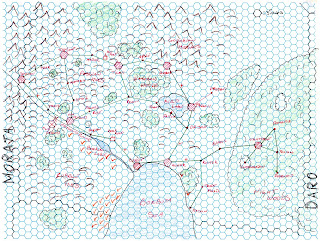